WhatsApp for iOS is an app that allows iOS users to send text and multimedia messages to other WhatsApp users without any cost. With almost all the functions of an advanced messenger, WhatsApp for iOS is continuously integrating new features in it and at present, it allows the user to save a voice message on local server.

This feature is very beneficial in cases when incoming calls come or app shuts down suddenly. Moreover, it allows the user to change chats in between the recording. This feature is not available in android or windows phones but will be rolled out later.

In WhatsApp for iOS, the user gets a video calling switch button. This allows a user to convert an ongoing audio call into a video call by just tapping a button. The recipient will get a request for transition, which asks him/her to establish a video call. If recipient denies, the video call won’t start but the voice call will continue.

Any message whether it is a text, multimedia or document sent by a WhatsApp user to another WhatsApp user is encrypted. This encryption is same for messages sent on groups (the conversation remains between the sender and group members only) and the administrator of group can hold up to 256 members. A group in WhatsApp for iOS allows sharing documents, videos, MMS, sending emoji, recording and sending voice messages, taking and customizing a photo, and sending the location through chat.

Earlier there was a yearly subscription fee to use WhatsApp but from 2016, this fee is waived off and WhatsApp is completely free to all the users of all the platforms. Moreover, this application is free from any kind of third-party advertisements.

WhatsApp allows a user to backup his/her chat history, photos, videos, and voice messages on Google Drive. WhatsApp is a closed system, i.e. it does not coordinate with additional messaging apps. For communication, the recipient should also have access to WhatsApp. 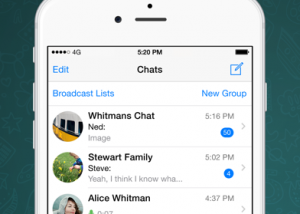 What do you think about WhatsApp for iOS?

Last versions of WhatsApp for iOS

Downloads of WhatsApp for iOS freeware

Get the latest freeware updates and news directly in your inbox. By clicking on "Subscribe" above, you are agreeing to the Terms of Use and the Privacy Policy.
© 2021 TopFreeware  |  All rights reserved.
created by FAUST